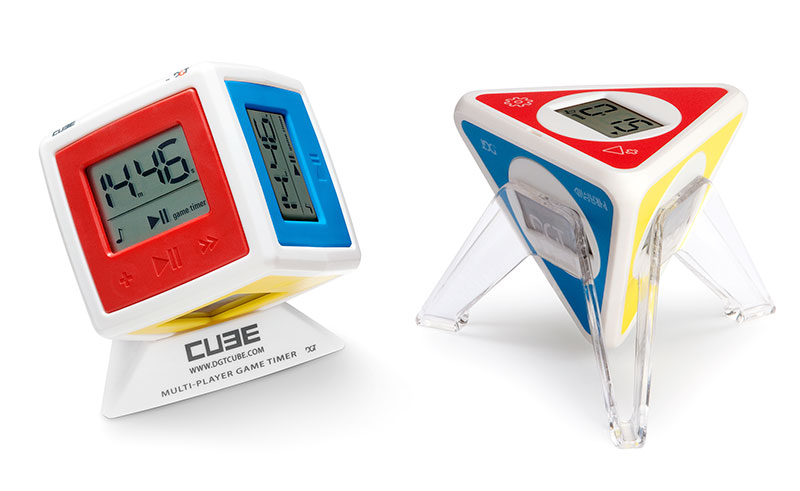 The DGT Cube is a six sided game timer suitable for any table top game or board game with up to six players. Each player has its own clock to keep track of his or her time. There are five different timing options such as counting down the allotted time per game or counting down the time per move.

Individual timing: with the DGT Cube it is possible to give each player a different amount of time. For example when playing with children they can be given more time per move (or per game) than the adult players.

Whether it is a competitive game at the club or a friendly game at home, the DGT Cube adds fun, fairness and excitement to any game.

A motion sensor ensures that only the clock facing upwards is running. Simply turn a different side up and the next player's clock will automatically start to run. Place the Cube in its base to pause all clocks and interrupt the game for example when disputing a word in a game of Scrabble.

Game timer option: each player has the same amount of time to complete the whole game; each time a player's clock is faced upwards his clock will continue counting down.

Move timer + save option: as in the move timer option each player receives the same amount of time at the start of each turn, but in

addition with the move timer save option all time a player has not used on its previous moves is saved and carried on to the next move. This option allows players to save unused time and build up a buffer to be used when needed. For example in a game of Rummikub when a move may simply consist of picking up another tile all unused time is saved for use at a later stage when a player may want to spend more time to think about his move.

Move counter option: each time a player's clock is faced upwards his counter adds one move to his total number of moves.